I know what you’re thinking: the words “Triple IPA” and “The Brewing Network” don’t typically go together, especially when JP is around, but this was a special occasion.  The fine people at Triple Rock in Berkeley invited Kim and myself to join a few other folks from the beer media in a joint collaboration beer.  When Triple Rock invites you to make a beer with them you don’t turn your nose up at the style selection, you just say “yespleasethankyou!” as quick as you can.  The beers at Triple Rock have pretty much always been stellar, and that place has a knack for finding talented brewers to crank out great beer.  Jeff, the current helmsman, is no exception to this rule.

The invite was to partake in probably my favorite aspect of the brewing process, which is recipe formulation.  AKA, not working hard, not sweating, not pulling a 14-hour day busting your hump.  It was perfect!  Joined by Kim Schimke, we met with Jeff and some other folks to chat about our upcoming brew day.  I will admit there was some talk about changing the style from a triple IPA to something a bit more approachable by yours truly, but in the end hoppier heads prevailed and the format stuck.

Before the actual recipe was hammered out, we sat and chatted about what sort of beer styles we liked and what we weren’t so keen on.  Almost immediately the table talk turned to murky IPAs.  Turns out I’m not the only one who understands you can get that same mouthfeel and “juiciness” without compromising clarity.  So that’s the direction we went in: a “juicy” triple IPA, but clear.  Suddenly I was interested again.

We went over some grain options, and got to smell through some hops before piecing together a nice little recipe, which is simple yet effective:

And for the hops we chose Simco, Galaxy, Citra, and Comet

When the time comes for us to drink this yet-unnamed monster beer, you know we’ll follow up on how it turned out.  If you happen to find yourself in the Berkeley area on May 19th, you can get an advanced tasting of this glorious beverage at the Nuclear Free Strong Beer Festival being held at Triple Rock.  Come for the Triple IPA, stay for the Reuben!

All in all it was a great night, full of beer conversation and stories from Jeff about the one time he almost fought Vince Vaughn at a bowling alley in Hollywood for hitting on his Mom.  You kinda had to be there …

Thank you to Triple Rock for the invite! 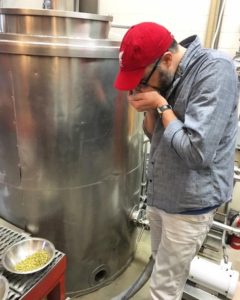 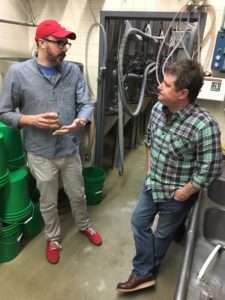 Two brewing powerhouses sharing secrets! Or Jeff is waiting for an excuse to leave, we forget. 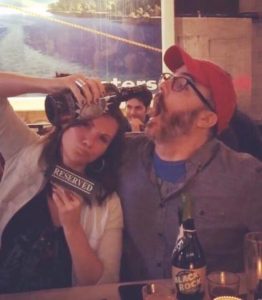 This is what happens after too much Triple IPA talk …