We’ve talked about it on The Brewing Network before, but it bares repeating: the Firestone Walker Invitational Beer Festival is amazing! The team at Firestone does a great job in not only securing some of the best beers from around the world, but the brewers are also at the fest to pour their beer and spread a little international good-will. Because Lord knows we need it.

Friday night is all about fun and drinking. While we arrived too late to go, most of these folks hit up the local water park that was rented out just for this event, because nothing says “I spend most of my days indoors” like letting a bunch of brewers loose on a water slide, only to see them walk around with a second-degree sunburn on their heads later in the evening. Don’t get me wrong, it’s a great time and we were all sorry we missed it … I’m just saying most beer folks seem to forget about sunscreen.

At Brewer’s Camp, it’s expected of you to roam freely from RV to RV, partaking in the various beers that have been laid out . This year, The Rare Barrel and Societe joined beer-y forces and threw a party on the first night in camp. Needless to say, the BN Bunker had more than one empty bottle of Rare Barrel when we woke up the next morning.

Saturday is the main event, with some of the best breweries around the world pouring beer after beer, while various food booths hand out savory treats to help chase away the sunstroke and alcohol-induced troubles. On the main stage, bands played throughout the 5-hour affair, and over on the less-main stage, your boys (and Kim) at The Brewing Network held two panels with industry luminaries like, Matt Brynildson, Julian Shrago, Lauren Salazar, and more. We talked about barrel aging, sour beer production, haze vs. clear beer, and the state of craft in general. It’s great for us to see just how many craft lovers show up to these panels to hear these brewers chat about their beers, because we are sort of locked in our homebrew bubble and eventually only think of craft drinkers as homebrewers.  So it was cool to pull our noses away from that dashboard for a bit.

After a quick respite in the BN Bunker, we were back at it for dinner and more fresh-as-heck Firestone Walker beers and tacos from someone called “The Taco Vato”. Were we scared? Sure. Were the tacos great? Double sure! To make matters even better, there was a table serving nature’s perfect food to folks in line for tacos … pie. Yes, folks, while standing in line for tacos we were offered up fresh berry pie while sipping on two-day-old Pale 31. It was … perfection.

This year it seemed like the brewers camp was a more mellow affair, especially on Saturday night, so we decided to take a listener called Greg … something … up on his offer to head to their rental house for a few beers. 4 rounds of Cornhole and many beers later, we emerged drunker and more rowdy than ever when Team JP/Taylor took the first ever “BN -Plus-A-Listener-Called-Greg-Something Cornhole Challenge” championship.  Not to be repeated.

Back in the RV, we had a musical tribute to dead musicians. Playing tunes from Prince, Bowie, Queen and Elvis, we sang loudly and longly into the quiet night until, as things tend to do at The BN, the songs turned to Yacht Rock. Not only did it make for a long night, but the morning wasn’t the easiest to greet, however we did so with a solid constitution and a renewed respect for the deeper cuts of Judas Priest.

I could go on and on about beer fests and how they are usually a benign affair, offering little in the way of enjoyment beyond whalezbrah!, but that’s not what the Firestone Walker Invitational Beer Festival is. It’s a full-blown experience, complete with bands, food, giant fans, and free access to plenty of high-quality H20.  The spirit of this fest, however, is this roaming, undulating tribe of beer lovers that aren’t there to ask for the highest ABV beer a booth has. They are there for the pure love of a craft beer environment they can’t find anywhere else. FWIBF is so much more than JUST a beer fest. It fashions together the best parts of our small (but growing) community of beer nerds and puts them all in one place to engage and enjoy the best of this global thing called “Beer”. It’s a beer vacation. A respite in these troubling times of buyouts, category-bending experiments, and anything with an IPA at the end of the name. Sure, those were represented there, but that’s because, as much as I hate to admit it, craft needs beers like these.  Yes, even the buyout beers, because when a craft brewery is bought out, it tightens this community up a bit and we rally around the independent breweries even harder.  My heart was warmed during this trip, because I got to see a side of craft drinkers I rarely see in this IPA-soaked corner of the industry … selection!  The largest lines I saw were for much more delicate beers – Pilsners, Milds, Pale Ales. As I walked around admiring the selection and looking for something to fill my glass with, I thought about how far beer fests have come in the last 15 years, and how far craft drinkers have come in the last 5. A line for a Pilsner? Be still my beating heart!

This festival opens doors to new beers, and it’s one I will do my best to never miss. 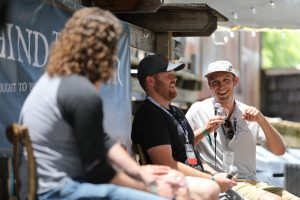 Alex from The Rare Barrel having what can only be described as a great time being interviewed on stage. 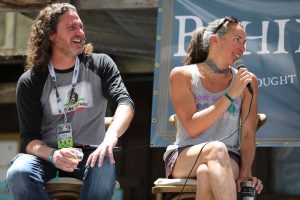 Justin and Lauren from New Belgium 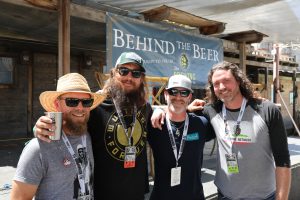 The brewers on our Haze vs. Clear IPA panel!