It’s a weird show today, folks!  A great, weird, wonderful show – our longtime friend Phil Lowry came all the way out from England to chat with us about what’s going on in the beer scene across the world.  Phil has been in the industry for around 20 years, doing everything from brewing to selling beer and hops to serving it to the public.  The man has loads of insight into craft beer and he brought a literal box load of beers along for us to drink as well.

In addition, he brought along Chris who brews at a brewery called Pohjala in Estonia, who brought many of his beers for us to try.  Loads of dark beers, barrel aged, and super well-balanced.

So not only did we get to drink some amazing beers that we can’t find out here, but we learned loads about the new hot spots of craft beer around the world, like South Africa and Estonia if you can believe it, as well as some new hop names to be on the lookout for.

It was a real fun show to run, and Phil and Chris could each have anchored their own show with the amount of information they gave out.

Perhaps the best part of the evening was finding someone tinier than Doc! 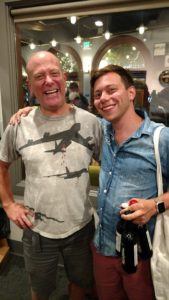 Doc standing tall next to Chris from Pohjala Brewing!

Tonight on The Session, We will be talking to Comrade Brewing Company.
View Calendar
Add